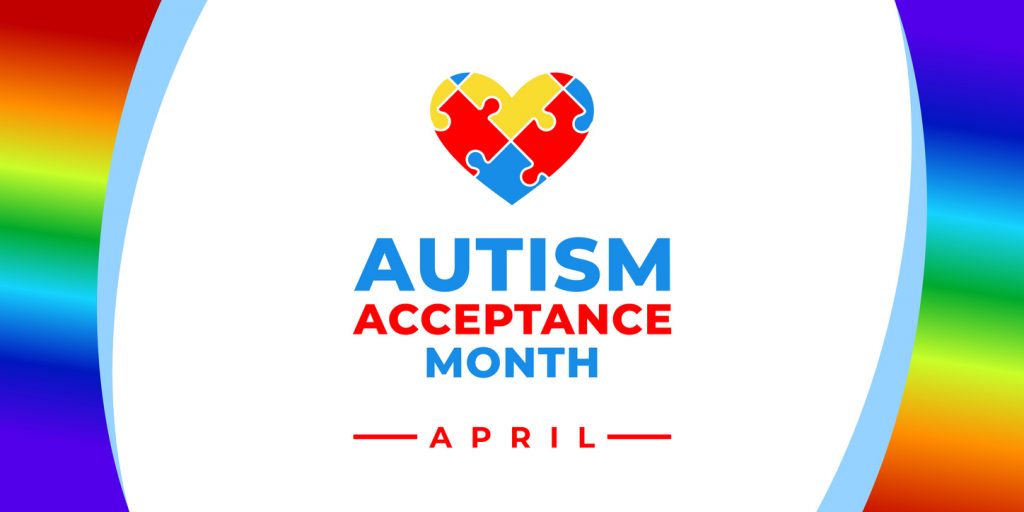 April is a very important month for parents, teachers, therapists and people with autism. It’s Autism Awareness Month, also known as Autism Acceptance Month, and here at Sing to Say, we’re always happy to support and celebrate the autistic community.

Autism Awareness Month was started back in the early 1970’s, with a campaign spearheaded by the Autism Society of America. In 1999, the Autism Society created the now well-known ribbon that features puzzle pieces in many different colours, representing how diverse autism can be for people living on the spectrum. Along with the puzzle piece ribbon, you might also see flags with a rainbow-coloured infinity symbol on them. Many people with autism have adopted this as a symbol of the range of neurodiversity in the world, ranging from those with autism to neurotypical people and everyone in between.

Some autism advocates prefer the use of the term “Autism Acceptance Month,” as opposed to “Autism Awareness Month,” as they feel it encourages people to be more welcoming to and appreciative of people with autism.

How Sing to Say helps

Sing to Say and Sing to Say Foundations are both apps that we’ve designed especially for children with autism. Our goal is to use music in order to help children grow their vocabulary and become capable of independent speech. We’ve done years of research and discovered that music is, indeed, a very effective way to teach language to children with autism.

Using music to teach language engages the music centers of the brain, not the spoken language centers (which can sometimes be impaired in some autistic individuals).  The music that we’ve created emphasizes the words we are trying to teach. The songs are clear, well-paced and easily recalled.  When we researched which instruments were most popular with our audience, we discovered that the piano, guitar and drums were the ones the children preferred.  In composing the music, we decided to keep our songs very short, to keep our audience engaged.

Both of our apps, Sing to Say and Sing to Say Foundations, have a wonderful ‘check it’ feature. This particular feature allows the child to check their knowledge of the words they have been learning. We know that repetition helps with retention.

At Sing to Say we stand for children with autism, their families, caregivers and educators. We are committed to creating a kinder, more inclusive community, where we can support one another each and every day!

Do you know a fabulous teacher, a terrific therapist or a super-involved parent? If you’ve got a story to share about a fantastic member of the autism community, we would love to hear it. Send us a DM with the details and we will be sure to share their story and shine a light on the support they bring to individuals with autism!

Music is the Path to Language for Kids with Autism

5 Helpful Tips to Encourage Your Child with Autism to Try New Foods!

Jam-packed with helpful tips from autism experts and fun activities for you and your amazing kid!